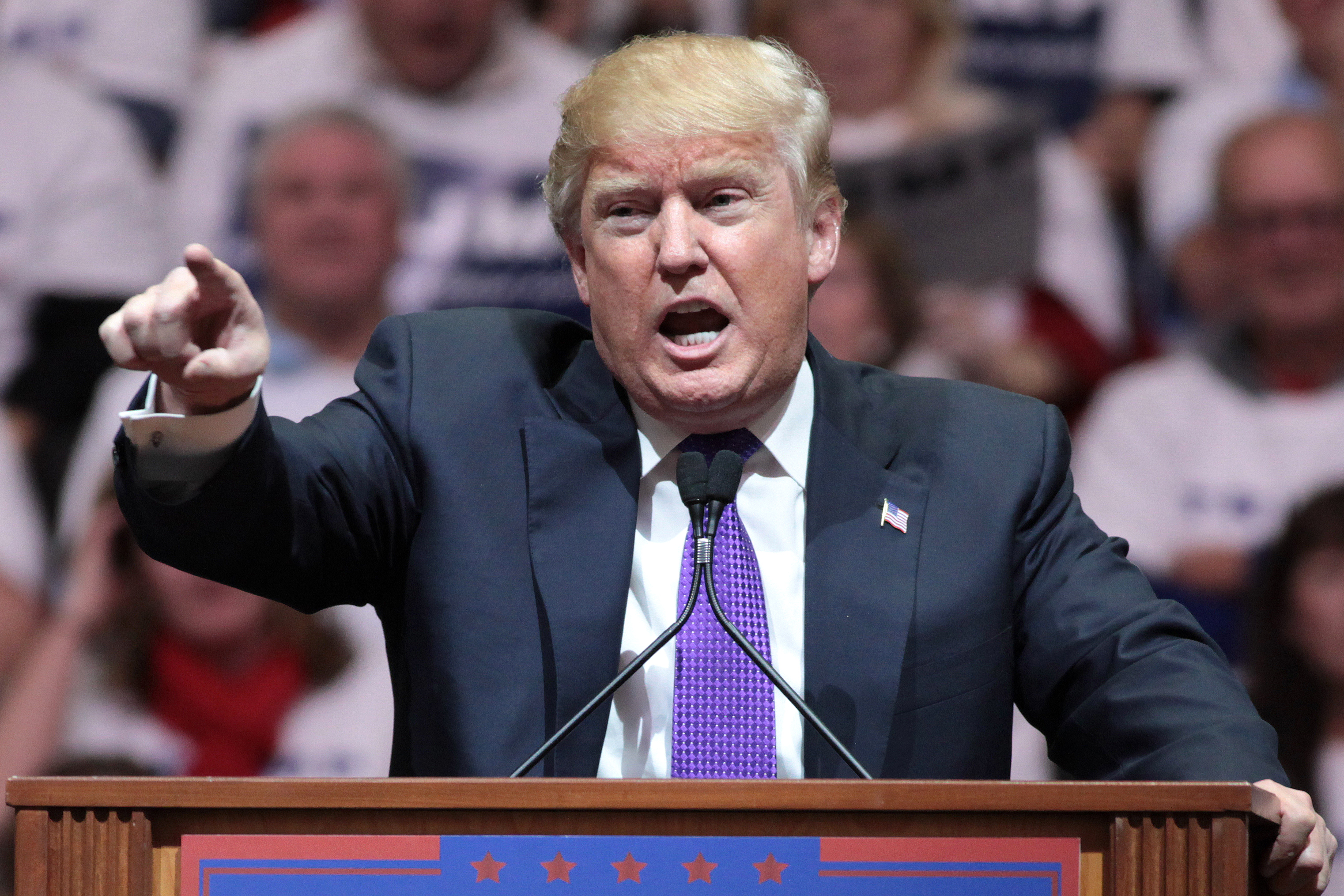 Like Donald Trump, Andrew Jackson was seen by many of his contemporaries as a true outsider to the Washington establishment and a danger to the country

On November 8, 2016, America did something truly unprecedented: it nominated a president and commander-in-chief that has neither served in any government office or military post. The electoral college reaffirmed this result on December 19. With business dealings all over the world, President-elect Donald J. Trump, a seventy-year-old billionaire, is both the wealthiest and oldest man ever elected President. He comes into power with his party in control of both houses of Congress and with executive power at an all time high in the wake of terrorist attacks and wars of the prior decade. He won the presidency despite the fact that a whopping 61% of voters believed that he is not qualified to serve as president.

But it isn’t just Donald Trump’s resume that defied conventional norms. His personality and temperament, as displayed on the campaign trail, were in stark contrast to the decades of generally stoic, cerebral, and mild-mannered major-party-candidates that came before him. Trump was also not shy about going after his opponents with harsh language, repeatedly using a boxing reference to proclaim himself “a counterpuncher.” He derided his primary opponents with disparaging nicknames  (“Lyin’ Ted,” “Little Marco” and “Low-Energy Jeb”).  He told a crowd at a Las Vegas rally that he would like to “punch [a protester] in the face,”  and he repeatedly referred to the Democratic nominee, Hillary Clinton, as “crooked.”
During the second general election debate, Donald Trump threatened to hire a special prosecutor to investigate Clinton and joked that if he were in charge of the laws of the United States Clinton would be in Jail. When voters were asked in exit polls whether Donald Trump had the temperament to serve effectively as president, 63% said no. 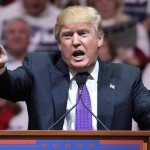 Finding historical comparisons for Donald Trump’s rise to the presidency is not easy. Other than Trump, there have only been five U.S. presidents that had never served in elected office before being elected to the presidency. Three of those men (Zachary Taylor, Ulysses S. Grant, and Dwight D. Eisenhower) had significant military experience before running. The other two, William Howard Taft and Herbert Hoover, both had extensive experience in cabinet-level positions for other presidential administrations. There was, however, one president who, despite experience in the United States Senate and U.S. House of Representatives, was seen as a true outsider to the Washington establishment and viewed with disdain and contempt by his contemporaries: Andrew Jackson. Andrew Jackson is not by any means a perfect mirror of Donald Trump. How could he be? The two men were elected to the presidency nearly two centuries apart. However, the similarities between the two men’s temperament and public image is striking.

“Mortifying and sickening to the hearts of the real lovers of free government.” –  Secretary of State Henry Clay’s thoughts after Andrew Jackson was elected president in 1828

Andrew Jackson, a country lawyer on the frontier, rose to the ranks of government to become a House member and later a U.S. Senator from the State of Tennessee. Although he was admired for his heroism in war, he was simultaneously feared and belittled by the Washington establishment. In 1824, Jackson ran for President against three establishment candidates: Speaker of the House Henry Clay of Kentucky; William H. Crawford, Secretary of the Treasury and a former U.S. Senator from Georgia; and John Quincy Adams, the socially-awkward Secretary of State and son of a former president. 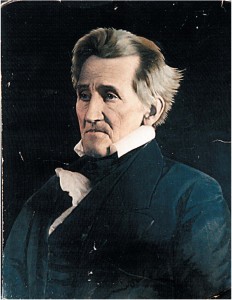 Much like Trump, Jackson was not at all a typical candidate. Also like Trump, Jackson was notorious for his temper in the face of what he saw as slanderous attacks. As biographer H.W. Brands noted,  “[Jackson’s] audacity on behalf of the people earned him enemies who slandered him and defamed even his wife, Rachel. He dueled in her defense and his own, suffering grievous wounds that left him with bullet fragments lodged about his body.” “Duel” was meant literally. Years before he ran for president, Jackson shot and killed a man in a  duel after the man had insulted Rachel. Jackson was a slaveowner at a time when disputes over the issue of slavery was becoming more commonplace. Thomas Jefferson, who had then been retired from the presidency for ten years, called Jackson a dangerous man, unfit for the presidency. Henry Clay feared that a man of Jackson’s temperament might turn the presidency into a dictatorship.

Despite his notorious temper and the disdain of many in Washington, Jackson was seen as the voice of the common man. White non-land-owning men were increasingly gaining the right to vote in the early 19th Century. In the 1824 election, Jackson won a plurality of the popular vote and electoral college. However, because no candidate received over 50% of electoral college delegates, the race was sent to the House of Representatives. There, Clay supported Adams, who had come in second in the vote count, despite Jacksons popular vote lead. Clay urged House members not to vote for Jackson, who Clay saw as unfit. Clay instead threw his weight behind the Secretary of State. Several months later, John Quincy Adams was elected by the House of Representatives. A short time after that election, Adams appointed Clay to be his Secretary of State, fueling allegations by Jackson that the two had reached a corrupt bargain. Jackson was furious. 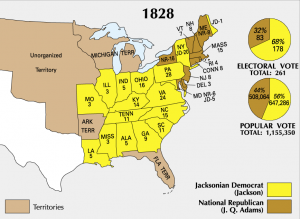 Jackson, enraged by what he saw as the corruption of the Washington Establishment, saw himself as the true interpreter of the will of the people. He resolved to run against Adams again in 1828. At a time when farmers felt that they had diminished standing in American life, and tensions over slavery were at a near historic high, Jackson campaigned as the strong executive that would restore order.  He believed that the of the power of the many required a powerful head of state.  Jackson saw the Washington establishment that Adams embodied as contemptuous of the common people. Adams, the well-educated northeastern Secretary of State from America’s first dynastic family was defeated in 1828. After the election, Henry Clay told his friend and long-time colleague, Daniel Webster, that the fact that election would even be close was “mortifying and sickening to the hearts of the real lovers of free government.”

The success of Andrew Jackson’s presidency is now left for history’s judgment. He is abhorred by many for his human rights record,  which includes his signature of the Act that forcibly removed Native American Tribes to a federal territory west of the Mississippi River, commonly known as the trail of tears.  Despite his human rights record, the image of Jackson as the defender of the common person against the wealthy bankers and Washington establishment has consistently earned him a high ranking and regard by presidential historians. He argued against the electoral college, stating in his very fist message to Congress that “[t]o the people belongs the right of electing their [President]; it was never designed that their choice should in any case be defeated, either by the intervention of electoral colleges.” 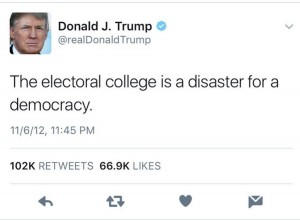 Of course, however, the differences Donald Trump and Andrew Jackson are numerous. Not least among them, Jackson was a war hero and served in a number of elected positions before becoming President. Jackson was not born in to a distinguished family with wealth and was never privileged enough to receive any formal education. But the similarities between Trump and Jackson are also readily apparent. Like Jackson, Trump tried to reach out directly to the common people during his presidential campaign. Like Jackson, Trump ran against a powerful political family that he lambasted as corrupt and out of touch with the average American. Somewhat ironically, Trump and Jackson both also called for the abolition of the electoral college (Trump lost the popular vote by 2 million people, despite his significant electoral college victory). Years from now, historians will assess President-elect Trump’s record and relative success as President. For now, a study of Jackson’s rise to power should provide some historical context.